ALL TOGETHER FOR THE GIRL!

DESPITE THE TIRELESS EFFORTS OF THE AUTHORITIES, THERE ARE STILL MANY ETHNO-CULTURAL DIVISIONS AND EVEN RELIGIOUS THAT PLAGUES THE EDUCATION OF THE GIRL IN SOME REGIONS OF CAMEROON.

“A child who is taught is a man we win” to quote from the French novelist Victor Hugo. That said, it is important and necessary to promote the education of youth, which is the nation’s spearhead. It is in this perspective that the communication agency On-Spot Cameroun allies to the government to mark its involvement in education. According to the education system, emphasis is layed on young boys over the girl. Studies demonstrate, according to UNESCO, 80% of men are in school against only 20% of women. Some tribes still prefer marriage by forcing girls to drop out school, about 40% of girls are forced to leave school before the class of class CM2, 31% of them are married before the age of 15. A country like Cameroon with a predominantly young population (women aged 15-49 and men aged 15-59, represent respectively 24% and 25% of the total population. Demographic, Health Surveys and Multiple Indicator – 2011) cannot know any harmonious development if social and human terms of what is around a third of its population (the girls) are so poor. Strategies to accelerate education of the girl are in place to enable them to be empowered in the Cameroonian society. Why in October 2016 the communication agency On-Spot Cameroun has set up a Relay-Training which will consist of educating girls from disfavoured regions for 10 months with the support of volunteers from regions (www.relais-bifty.com). It’s time to invest for the girl.

Benji: Now which of these schools will win the trophy, i'... 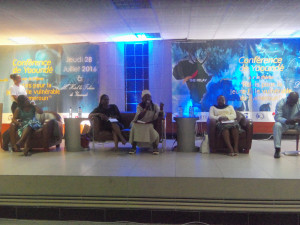 NO TO EDUCATIONAL BARRIERS!
DESPITE THE TIRELESS EFFORTS OF THE...